Create an Account - Increase your productivity, customize your experience, and engage in information you care about.

The City of Azusa
The City of Azusa was founded in 1887 and incorporated as a general law city on December 29, 1898. The City is located in the County of Los Angeles, situated 27 miles northeast of the City of Los Angeles, and nestled against the San Gabriel Mountain foothills. The City of Azusa encompasses 9.13 square miles and has a population of approximately 45,000. Educational facilities include 9 public elementary / middle schools, 2 public high schools, 1 private school, and 1 private university.
The Land of Asuksa-nga
The first recorded reference to Azusa was found in the diary of Father Juan Crespi, diarist and engineer with Portola Expedition in 1769, then on its way northward from San Diego in search of Monterey Bay. Having come northward through Brea Canyon, Crespi, while camping in the vicinity of Bassett, remarked of the river and the valley to the north. 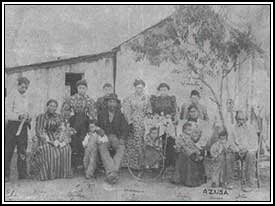 The valley is 3 leagues wide and paralleled by a tall mountain range running east and west. This stream and valley he named the San Miguel Archangel after the Patron Saint of the day, as was their custom.

However, he also referred to this area as The Azusa in his diary. Here roamed the Shoshonean-Indian, locally known as the Gabrieleno when the area of Azusa was first inhabited by white immigrants and homesteaders. Their community was known as Asuksa-nga. It is said Azusa was derived from the native American name.

An area of land some 3 miles square was given to Luis Arenas by the Mexican Government as a Mexican land grant in 1841. Arenas built an adobe home on the hill in the eastern part of the City, farmed and raised stock, and called his newly acquired possession El Susa Rancho. In addition, Arenas owned a 1 B third interest in the San Jose and San Jose Adicion with Ignacio Palomares and Ricardo Vejar. In 1844 Arenas sold all of his holdings to Henry Dalton, an Englishman who acquired his wealth in buying and shipping goods from Peru to Wilmington Harbor, now Los Angeles Harbor, and San Francisco. Don Enrique Dalton, after paying $7,000 to Arenas for El Susa Rancho, changed the name to Azusa Rancho de Dalton.

On the Azusa Rancho, Mr. Dalton planted a vineyard extending northward from the Dalton Hill to the Sierra Madre Mountains. He built a winery, a distillery, a vinegar house, a meat smokehouse, and a flour mill, importing the mill stones from France in 1854 and erecting his mill on a ranch ditch which delivered water to the south portion of his property. During the great flood years of 1861 and 1862, the flour mills along the various canyons from San Bernardino were washed out and most of the people brought their grain to the Azusa Rancho de Dalton for grinding.

El Doradoville: The City of Gold

During 1854, gold was discovered in the San Gabriel Canyon and a town named El Doradoville was built at the fork of the San Gabriel to take care of some 2,000 miners who had filed on gold claims along the east fork of the canyon. During the next 20 years, it is estimated that $12 million in gold was mined and shipped to various mints throughout the United States. The town of El Doradoville was destroyed by flood waters in 1861 and 1862.

In 1860, the United States Land Office sent an engineer from Washington, DC, who surveyed the Dalton Azusa Rancho, taking a mile and 1-half from its southern boundary and a mile and 1-half from its eastern boundary, making the property taken by the Federal Government subject to homesteading. An influx of people began streaming into the area, filing usually on 40, 80 or 120 acre lands for their homesteads. This Mr. Dalton considered unfair. He had not the money to fight the case through the courts and borrowed money from Jonathan S. Slauson, one of the early Los Angeles bankers.

Mr. Dalton had to make several trips to Washington, DC. The courts decided against him after 24 years of litigation. Consequently in 1880, Mr. Dalton turned the Azusa Rancho over to Mr. Slauson, who deeded a 55-acre homestead to Mr. Dalton at the head of Azusa Avenue and Sierra Madre Avenue.

In 1868, the Azusa Valley had grown considerably and schooling for the children was getting to be a problem. A meeting was called on Dalton Hill and a citizens committee was formed to take the necessary steps to provide a Provisional School for the community.

The following excerpts from Henry Dalton diary tell of these days:
Monday, May 11, 1868: In the afternoon the people met at Williamson to determine about the erection of the Provisional School and it was determined to meet on Friday with wagons, tools, etc., to haul logs and brush necessary and on Saturday to raise the brush school house.
Friday, May 15: My man Burns was hauling brush for the school house. After a long debate it was decided to build the school house between the Dalton Hill and Williamson (which would now be located on the east side of the old squatter ditch and Third Street).
Wednesday, May 20: The school house was finished. Beckman and others prepared the stools, desks, etc., and prepared to hire a teacher.
Thursday, June 11: Went with Williamson to take a census of the children along the mountains as far as San Dimas. (A distance of 8 miles.) A School Board was appointed by the committee, consisting of Oliver Justice, President; Dutcher, Secretary; and Williamson.
The first school, built of logs and brush, was the first public school built in the Upper San Gabriel Valley, then called Azusa Valley. In 1891, the first Union High School, named Citrus, was built at the southwest corner of Citrus near Broadway.

During 1887, Mr. Slauson laid out the town of Azusa, and it is a matter of information that when the date was set for the sale of lots, people stayed up all night and some of them paid as much as $500 for front places in line for first purchase of lots. When the streets were being graded, there were unearthed many native American mortars, which proved that native Americans did inhabit this area in the early days before the white man. 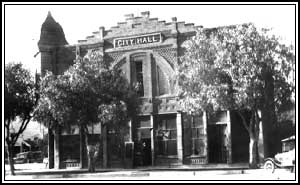 There is ample and abundant proof of native American activity in the Azusa (San Gabriel) Valley. It can be presumed that many a ranchero existed for both short and long periods of time. Many artifacts and implements have been found in various places.

Near the mouth of the San Gabriel Canyon, southerly from the Duarte Ditch, near where it crosses the wash, are to be found stones in a long rambling line which, no doubt, had some important significance to the native Americans. These stones are still fairly well established as placed at some remote period by a race long since gone.

At the Forks there is an old burial ground. Seven sets of remains were uncovered a number of years ago. Each body had a cairn of stone placed over the abdomen, at the top of which was a stone mortar.
In the San Gabriel Canyon are to be found several huge rocks, the largest weighing some 75 or 80 tons. These are covered with native American markings yet quite distinct, though no doubt having weathered the storms of several generations. Mortars were found in large rocks which goes to show that the native American activities were somewhat varied. That the canyon was used as a bypass to the desert there is no doubt, and the mute evidence found, it must have been of more than passing interest to while away their abundance of unoccupied time or as a retreat from an enemy. Whether right or wrong in the latter assumption, there is ample evidence of their activities.